Last orders for the Coach and Horses?

They were nervous days, the end of May in 2006, when Norman Balon, the long-time landlord of Soho’s Coach and Horses, was retiring.

What would happen to the pub that had become so familiar to many so many people?  Regulars might not always have been on first name terms, but we all knew who we were. All of us had our preferred spots along the bar.  Norman's departure meant a spot to which we had all escaped suddenly felt threatened.

These fears proved to be misplaced.  Under the new (seems almost daft to still think of him as ‘new’) landlord Alastair Choat the pub has remained a treasure in the West End.

But now, thirteen years later, lovers of the Greek Street pub, which I sadly visit far less frequently than I once did, are fearful the lovely old place will succumb to the whims of freeholder Fullers who are unwilling to renew Alastair’s lease and plan to take it back in house.

Back in 2006, no one could blame Norman for wanting to move on. He claimed he was retiring ‘because all my customers are my age and one by one they’re dropping off their bar stools’.

He had worked at the pub since February 1 1943 but, despite diligently cultivating his persona as the ‘Rudest Landlord in London’, he was held in huge affection by regulars.  It wasn’t just the cartoon-printed mugs handed out every December, mainly it was that inside Norman was, and no doubt still is, incredibly warm hearted, generous and caring for his regulars. (I say this despite having a photograph of the pub at home, with the message ‘the worst editor in London’ written by Norman in his barely legible scrawl. It is true his rudeness could be fabulous and marvellously entertaining.)

At his leaving party, drink took the priority above speeches, but Norman did say:

To which Private Eye's Richard Ingrams piped up 'the only man grumpier than me, I salute you'.

For a time, Maison Bertaux was trying to purchase Greek Street pub, and I was briefly involved in the scheme. Falling short by a couple of thousands of pounds, my wife and I agreed to invest to secure a deal for the pub. One day an agreement appeared to have been made. Yet, in the time it took for me to make a journey on the 24 bus from my office in Camden Town to Soho – during which I imagined myself insisting on retaining my stool on the basis that embodied the sum of my financial contribution – the deal collapsed. Norman was leaning on the bar as I entered and snapped that it wasn’t happening. Uncertainty resumed.

Norman did leave though and along came Alastair and despite the pub getting a spruce up – the woodwork behind the bar was suddenly polished and lights behind the Ind Coope sign appeared – little at first seemed to change. The toilets remained terrible. The pub stubbornly refused to play music.

Crucially, though, the pub retained its down-at-heel charm and his tenure has been one of great success.

There were a few changes. On the first floor the room where Private Eye still hosted their lunches – and where I once held a raucous leaving party – was knocked through and became an attractive dining room, engulfed with delightful light streaming through the high windows on both Greek Street and Romilly Street.

Under the influence of Alastair’s daughter Hollie, the pub turned its back on meat stuffed pies and became London’s first vegan and vegetarian pub. The quality of the food remained excellent.

A pair of cats arrived, Earl and Grey. Slinky and jet black, they could be found on the bar, sleeping on chairs, in empty crisp boxes, jumping on laps or typically elusive.

Then there was a piano. Norman Balon didn’t approve, as Alastair told Robert Elms on Radio London earlier today (February 13); ‘he hates music in pubs’, but with it came hugely popular singalongs on Wednesdays and Saturdays.

What do Fullers want to do with the site? No one is quite clear though it would remain as a pub. Alastair would certainly be gone, replaced by a manager whose loyalty would be to the freeholders rather than the pub. As Alastair says: ‘the great British pub landlord dedicates all their life to the pub. The pub is our front room’. It's worth noting, not only are landlords more loyal to pubs than managers, regulars are loyal to landlords as well as pubs; something not often appreciated.

How much time would a manager have given Pamela Jennings, the shaven-headed homeless lady who used to try and get donations from regulars? Affectionate and sweet, she would often hug familiar faces and utter the cry ‘love you’ before darting off. She died in 2012 and was buried in East Finchley but it was the Coach and Horses which hosted her wake. 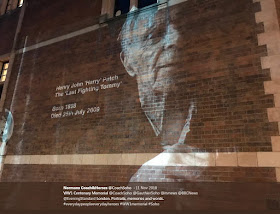 And how many pub managers broadcast images of World War One veterans to mark on Remembrance Sunday, making 100 years since the end of the war? I’d wager not many.


Fullers claim they want to make it ‘one of the gems’ of their estate, without realising it is ‘an incredible jewel exactly as it is’, as Alastair said on the radio.

There is little doubt Fullers would spend a fortune the site. After acquiring the Half Moon Pub in Herne Hill, a reported £2.5million was spent smartening it up. In all fairness, this was done quite sympathetically, cleverly blending the old and the new. But, the Half Moon lost much of its identity as its live music space was lost, replaced with hotel rooms. It isn’t hard to imagine something similar, a Soho bijou hotel, dining out on its links to journalism, could be planned for the Coach and Horses. Who knows? Maybe it’ll be reborn with the Jeffrey Bernard Suite, the Tom Baker lounge and the Norman Balon Barred Bar.

In the meantime, Alastair and his daughter Hollie have launched a campaign to try and persuade Fullers to change their mind. There is no legal route to stopping the changes, just sheer pressure from the pub's fans can save this institution. It needs to be saved.

The comments expressed do not necessarily represent the views of the blog.